In celebration of his life, John's wife Aenea has prepared the below tribute.

Aenea has chosen to direct donations made in John's name to Friends of ANCHOR, for which we are very grateful. You are invited to share a memory or message in addition. Any messages submitted via the form below will be added to this page.

To date, the sum raised in John's honour is £4,449.75. Every penny of every pound donated goes directly to the cause, as the charity's operating costs are fully covered.
Step 1 - Share your memory or message
-
Step 2 - Your donation (if applicable)
Donate in memory of John Sinclair Reid

My husband, John Sinclair Reid, died peacefully at home, on Sun 21st Feb, aged 78; a huge loss to myself, our sons, Iain and Hamish, and John's younger sister, Margaret. Since his death, we have been overwhelmed by the tributes we have received from friends, colleagues and former students.

Friends described him as kind, knowledgeable, full of curiosity, practical and generous of spirit, and a 'real gentleman'. Former students have said how much they enjoyed his teaching and valued his advice. One even described him as 'the best lecturer ever' - a high tribute indeed. He touched the life of many and will be sorely missed

We have set up this page to enable those who knew him to contribute in his memory to a charity to which he himself made a bequest in recognition of the support he received during his stays in hospital.

John was an educator, researcher, historian and family man, loved and respected by everyone with whom he came into contact. He was full of ideas, enthusiasm, encouragement and anecdotes – a quick conversation with John and you’d end up with new ideas.

Although born in Chorleywood, John spent most of his life in Aberdeen and Aberdeenshire, first as a boarder at Robert Gordon's College and then in Hamilton Place, after his father retired to Aberdeen. In his student years he shared an allegedly uproarious flat in King Street and a convivial town house in Springfield Place which is when we met. After marrying in 1970, we bought a tiny cottage in Downies Village, giving rise to our love of living by the sea. Then in 1979, with Iain on the way, we moved to the neighbouring village of Findon to a house with a magnificent view of the sea and overlooking Findon Moor where John rambled frequently, took lots of photos and, more recently flew his drone over the moorland and cliffs.

His career at the University of Aberdeen spanned 50 years, a journey from undergraduate to Head of the Department of Physics. Subjects he taught included optics, digital electronics, mechanics, thermodynamics, astronomy, and meteorology. His research career included several key contributions to the field of solid-state physics through the use of X-ray scattering techniques.

John was keenly involved in mechanical and scientific history. He was President of the Aberdeen Mechanical Society, curator of the nationally recognised Historical Scientific Instruments Collection at Marischal College, and gave numerous talks on key figures connected to Aberdeen science, such as James Clerk Maxwell, Patrick Copland and David Gill. John’s book, ‘Mechanical Aberdeen’ explored industries located in and around Aberdeen at the turn of the 20th century. He was also a founder member of the Scientific Instrument Society with whom he enjoyed numerous study visits to collections throughout Europe.

In his home life, John was a keen sailor, progressing from racing Fireball dinghies in Stonehaven in his youth to yachting on the West Coast of Scotland when older. He was also a keen cyclist, a familiar lycra-clad figure whizzing round the country lanes in our corner of Aberdeenshire. A great lover of the outdoors and the Scottish coastline, it’s no accident that both his professional and private life focused on the natural world.

He was a wonderful father to Iain and Hamish; encouraging, inspirational, amusing and a constant source of information and practical advice. They are going to miss being able to pick up the phone and seek advice on anything from plumbing, through house purchasing, to developing a new lecture course. One of John's regrets in his final months was that he wouldn't be there to see the grandkids, Aileana (8), Elowen (5), Evelyn (4), Angus (2) and Torin (1), grow up.

Thank you for your interest in John. I hope you'll feel inspired to make a donation. If you'd like to read a bit more about his life in his own words, he penned a short autobiography which is available here. 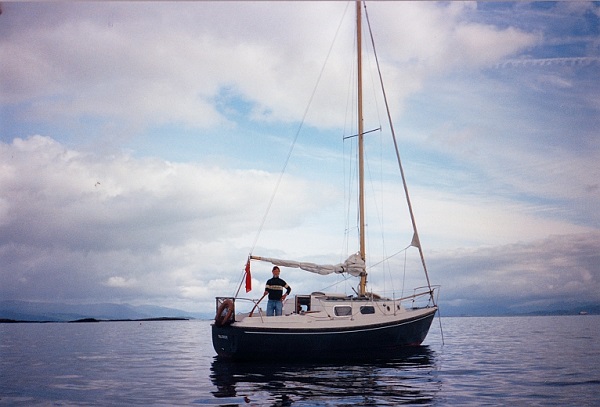 John on his beloved yacht Talisker in 1991
+ 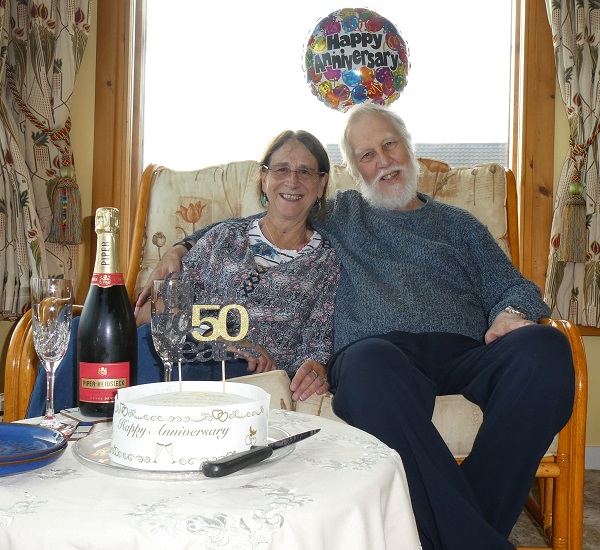 John and Aenea celebrating their Golden Wedding Anniversary in September 2020
+ 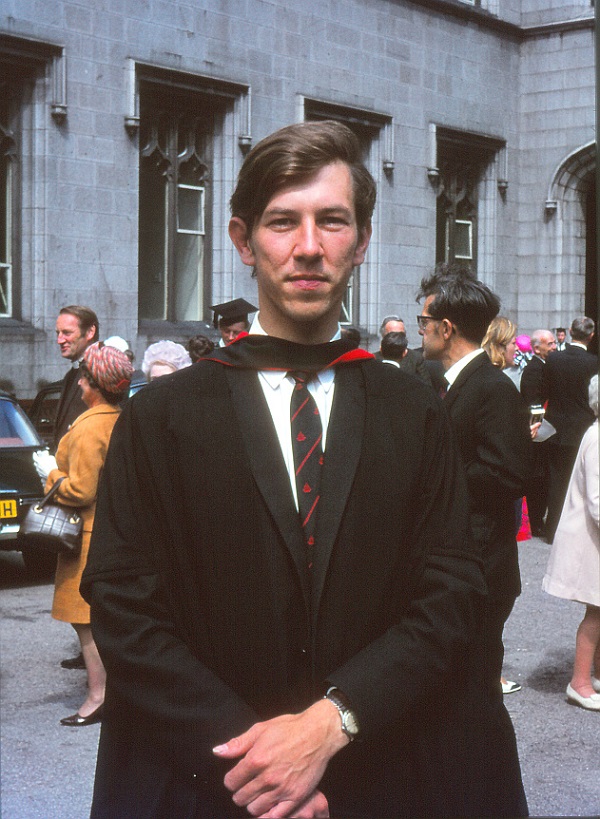 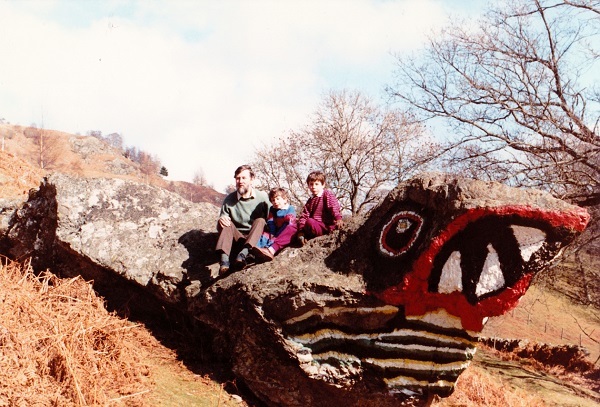 John with Iain and Hamish at the St Fillans Crocodile, 1986
+ 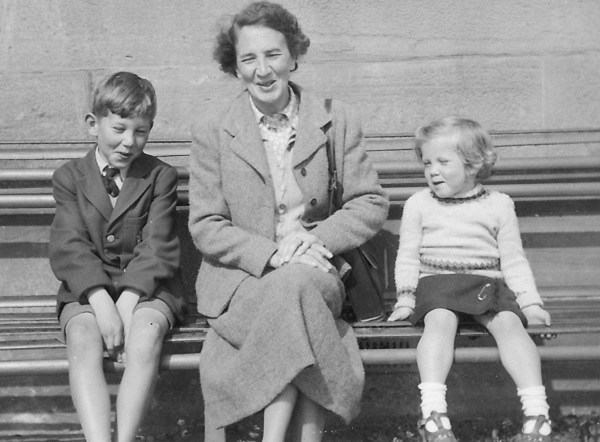 John with his mother and younger sister, Margaret, in 1950
+ 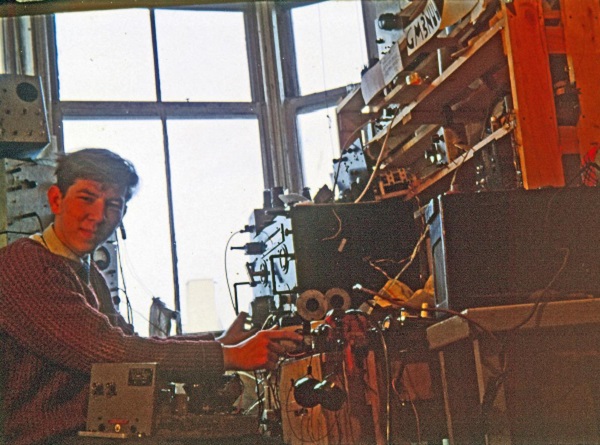 John with his amateur radio rig in 1962 (we still have that fearsome machine in the loft!)
+ 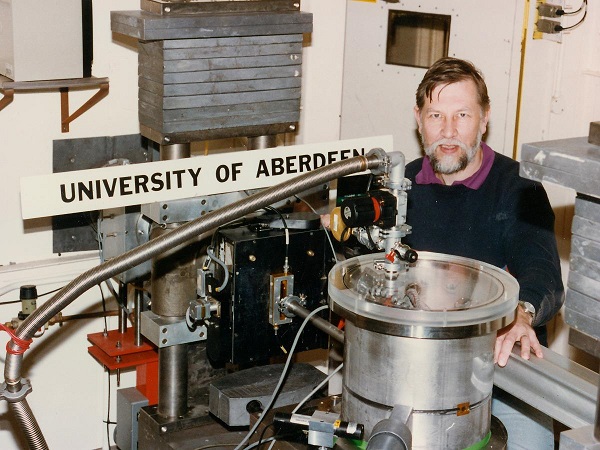 John at Daresbury Research Laboratory in 1990
+ 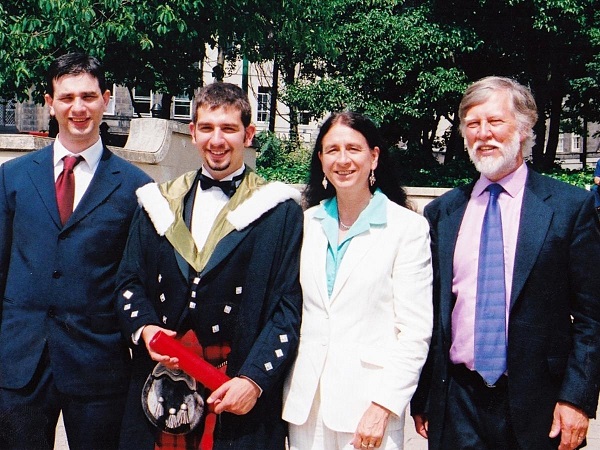 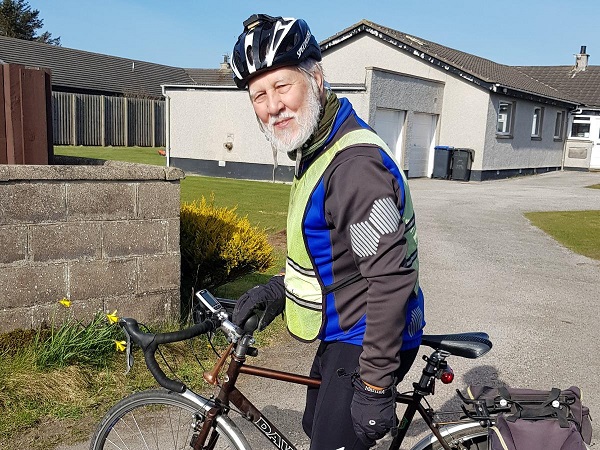 John on his bike in April 2020
In memory of my best friend and soulmate. Thank you for the wonderful 50 years we had together.
Aenea
To Dad. You've gone too soon. We all miss you.
Iain
Dad, we will always miss you.
Hamish
In memory of a great educator, mentor and thoroughly good bloke.
Brian R
You will be missed. Hugs, thoughts, prayers and our love to Aenea, Iain, and Hamish
John and Michele
Thank you for our scientific collaborations over many years, for the papers we have published and presented at international conferences, and above all for your friendship. Our many happy memories will last for ever.
Moreton Moore
John, I will miss your courtesy, collegiality and sense of humour. Rest in peace.
Mike McC
John was an inspiring and engaging man who enriched the lives of those who knew him. It was a privilege to have known you. Our thoughts are with Aenea, Iain, Hamish at this difficult time.
Calum and Angela
We are grateful for all that John gave us and many other people. We miss his warmth and gentle reassurance.
Roger Clarke
It was with great sadness that we at Aberdeen Astronomical Society heard of John's passing. He was a great friend of the society and he was there to offer us accommodation at Aberdeen University's Cromwell Tower when we lost access to our previous venue. We remember well his excellent talks on subjects such as cosmology and the lives of local hero astronomers such as David Gill, James Gregory and James Clerk Maxwell. He will be greatly missed.
Aberdeen Astronomical Society
I shall miss you and our discussions, John. Thank you for all your support.
Graham Hall
Love and fond memories of John, our dear Brother in Law. Love and Virtual Hugs for Aenea and all the family.
Iona and Dick
Many condolences to Aenea, Ian and Hamish.
Bob and Ingrid Pringle
We will miss him so much.
Jan S
Go well John. Thanks for the wise counsel and wonderful stories, you will be sorely missed.
Anonymous
A rich life. You'll be missed.
Anonymous
Will remember him as the warm, intelligent, interesting, kind, humane man that he was.
Anonymous
Farewell John and fair winds...
Anonymous
With affectionate memories of student days in Aberdeen
Elaine and Mike
A great guy.
Anonymous
In memory of a neighbour, friend and gentleman.
Christine and John
John was always a deeply warm and engaging person to spend time with, and an incredibly generous and welcoming host at his home in Findon. My deepest condolences to the entire family.
Tom Moore
With warm thanks for donations also received from Abeer, Alex, Alistair Scott, Allison, Ben Marsden, Denis, Duncan and Yvonne Haig, Gordon Peterson, JDP, Margaret M, Mary M,  Mervyn and Anne-Marie, Perham Harding, Richard and Philippa Johnson, Robbie and Judy, Robert and Gelis, Shona, Susan, Una, and all those who chose to donate anonymously.

In celebration of John's life, his family welcomes you to share memories or a message of how his life impacted yours. Messages submitted via the form below will be added to this page.

Step 1 - Share your memory or message
-
Step 2 - Your donation (if applicable)
Donate in memory of John Sinclair Reid
Make a donation
T 01224 859170
info@friendsofanchor.org
Legal
We use cookies to ensure that we give you the best experience on our website. For details, please check our Privacy Policy
I'm okay with this