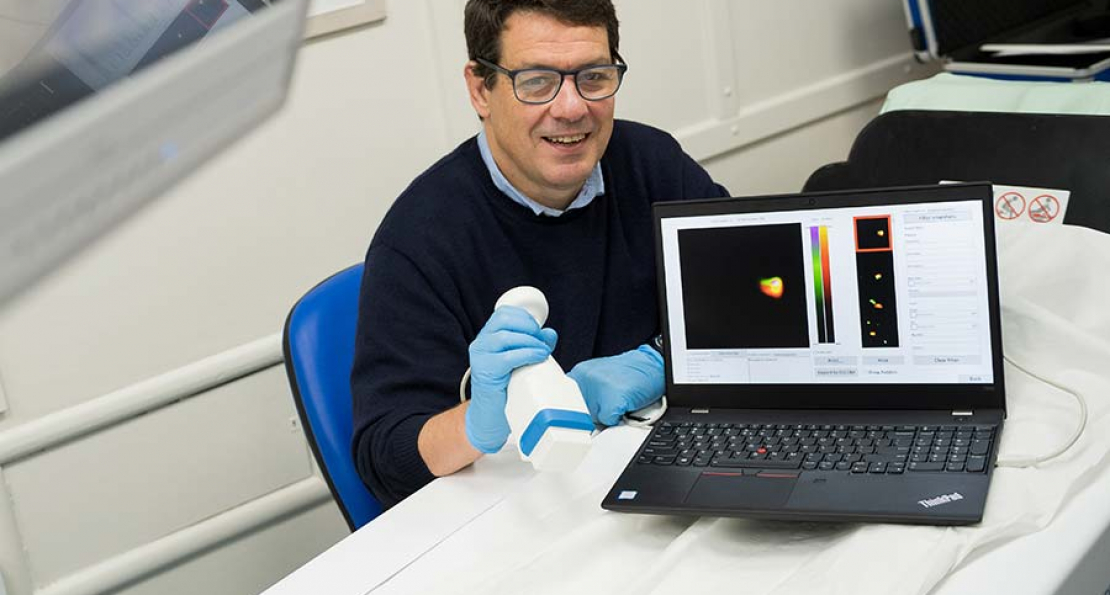 Aberdeen Royal Infirmary is the first NHS hospital in Scotland to benefit from a new imaging system, thanks to funding from Friends of ANCHOR and the NHS Grampian Endowment Fund.

The £35,000 CrystalCam was half-funded by each charity and is now in use within the nuclear medicine department at ARI, where specialists are already reaping the benefits for their patients.

The new, hand-held device is small but mighty; allowing surgeons to picture the distribution of radioactive material in the operating theatre.

Dr Roger Staff, whose team has been using the equipment for a little over a year now, explained: “When patients require a lymph node biopsy, we inject a radioactive solution into the lymphatic system, which collects in the nodes where there may be tumours present. We have to track where these particular nodes – called sentinel nodes – are located, in order to perform the biopsy.

“The CrystalCam provides a picture of the lymphatic system and shows where the radioactive solution has pooled, in real time, allowing for more informed planning of the procedure to remove the node. It also means we’re able to survey a wider area, and we can allow for better location of tumours and potential sites of spread. All of this helps to facilitate more appropriate surgical planning; so it’s an incredibly valuable tool.”

The compact hand-held camera provides a revolutionary step forward, as its predecessor was a large and bulky fixed system.

Dr Staff added: “It is a small system that will bring a big impact to patients who require a lymph node biopsy - and the kit represents an opportunity for significant future gains.”

Erica Banks, PR & Fundraising Executive for Friends of ANCHOR, said: “We’re pleased to have been able to come alongside NHS Grampian to bring this exciting new piece of equipment to Aberdeen, for the direct benefit of patients right here in the North-east of Scotland.”

Sheena Lonchay, operational manager for NHS Grampian Charities, said: "NHS Grampian Endowment Fund is the charity which safeguards donations made by patients, families and users of health services. We are enormously grateful to the people of the North-east for their generosity in giving to this fund; we were delighted to work with Friends of ANCHOR to support the purchase of this device."

Speaking about the contribution from Friends of ANCHOR and the NHS Grampian Endowment Fund, Roger said: “Friends of ANCHOR is a tremendous resource and we’re very lucky to have the support of the charity in the North-east of Scotland.

“Nuclear medicine in Aberdeen has benefitted significantly from the charity’s support in the past, with a £100,000 investment into a radiopharmaceutical dose administration system for more effective cancer diagnosis and treatment. Thanks to charity funding, we were once again the first site in Scotland to have this advanced robototic equipment, which is now a core part of the Scottish service.”