Local firm Nicol of Skene raises over £20,000 for Friends of ANCHOR 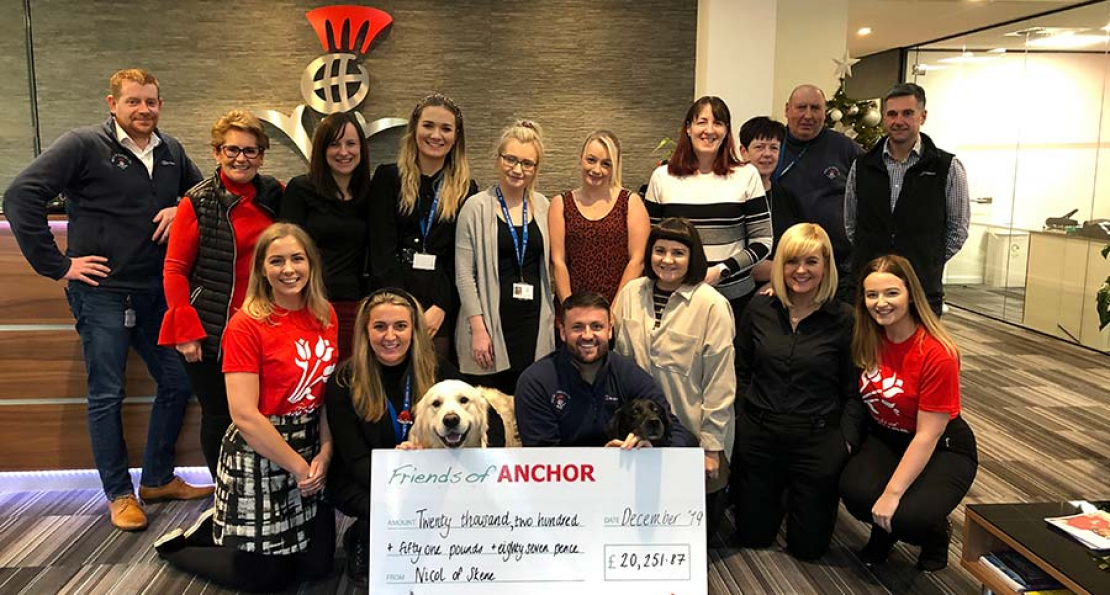 Civil engineering firm Nicol of Skene has raised more than £20,000 for Friends of ANCHOR.

The company, which is based near Westhill, raised the funds throughout 2019 by organising various events including a hugely popular dog walk and golf day, with additional donations made every time the firm’s suction excavator, ‘The Anchorator’ was hired.

Employees also took part in the charity’s own initiatives such as ANCHOR Wipeout, with two of the firm’s bosses even walking miles to raise funds through the Aberdeen Kiltwalk. The total raised to date is £20,489.87.

Stephanie Nicol, HR manager and company director at Nicol of Skene, said: “We had such a fun year flying the flag for Friends of ANCHOR and bringing our unique fundraising ideas to life. Friends of ANCHOR is a charity that means a lot to us as a family and a workforce, and it’s been great to see everyone rallying around to show their support.

“Some fundraising highlights have to be our own Furry Friends of ANCHOR dog walk, which was a huge hit this summer at Haddo House, and the golf day organised by our contracts manager Liam Nicol.

“We were really pleased to once again sponsor the charity’s ANCHOR Wipeout event and our Wipeout teams really got into the spirit, raising a further £10,000. We’re very proud to have raised more than £20,000 for this local cause and it’s great to know every penny will go to the cause.”

Erica Banks, Friends of ANCHOR’s PR and fundraising executive, added: “Nicol of Skene were one to watch in 2019. It was wonderful to see the creativity the team brought to their fundraising efforts, always going above and beyond to create a memorable experience for everyone attending their events, covering every little detail right down to doggie portraits at their Haddo House dog walk.

“Their hard work certainly paid off and we are very grateful for the amount raised – a whopping £20k+! As always, it has been a pleasure to have the team at Nicol of Skene come alongside the charity and we would like to say a huge thank you and well done to everyone at this fantastic family-run company.”

The local firm raised the funds through their dog walk, golf day and Halloween bake sale. Throughout the year, they also donated a percentage of hire funds from their suction excavator, ‘The Anchorator’, which was aptly named in recognition of their charity support. The company’s chief executive Derek Nicol and HR manager and company director Stephanie Nicol also undertook the 26mile Aberdeen Kiltwalk in aid of Friends of ANCHOR, with employee and Anchorator driver Kevin Milne running 12 races for the charity.

In addition to fundraising more than £20,000, Nicol of Skene also sponsored Friends of ANCHOR’s 2019 ANCHOR Wipeout event, with four teams flying the flag throughout the two-day event.

Thanks to full charity sponsorship from Balmoral Group in Aberdeen, 100% of the funds raised will go directly to the cause.