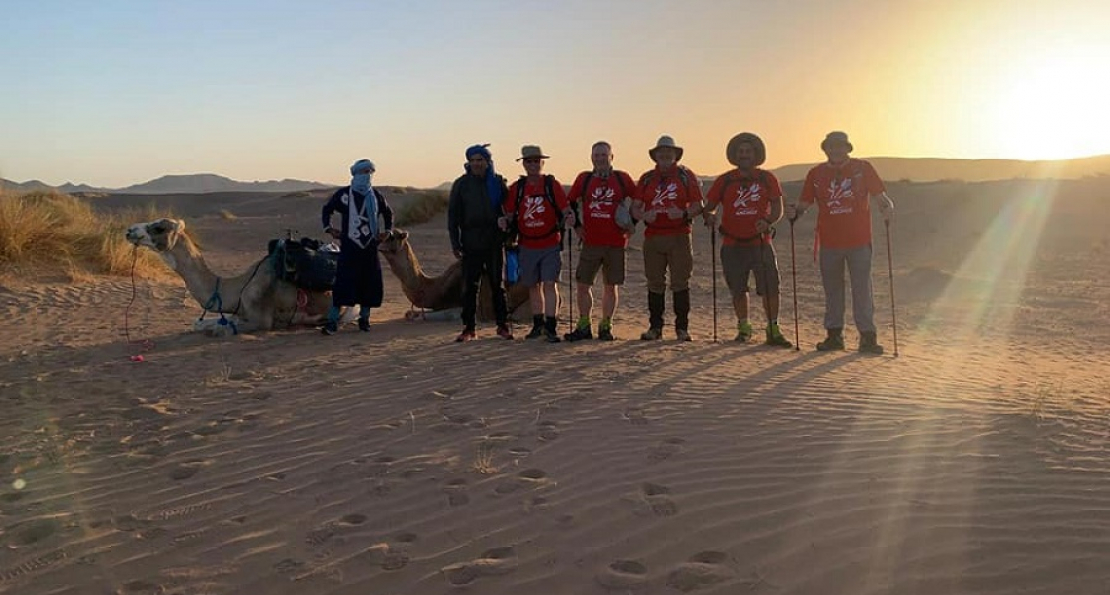 After three years of postponement, five friends, dubbed the ‘Wolfpack’ are setting off to trek the Sahara Desert in aid of Friends of ANCHOR and The Brain Tumour Charity.

Pack leader Ken Gardiner has a special connection to the challenge, and the charities supported through the trek.

Mr Gardiner said: “In 2019, my sister Donna was diagnosed with stage 4 brain cancer and then my close friend Ally was told he had neck cancer. As a group, we wanted to do something to support both Donna and Ally, which is when the idea came up to trek the Sahara.

“No one in the group has done anything like it, but we’ve been spurred on by the wonderful support we have received from friends and family for our two chosen charities.”

The group began fundraising in 2019, for The Brain Tumour Charity and Friends of ANCHOR, with more than £20,000 raised in total.

Since then, Mr Gardiner’s sister Donna and his fellow Sahara walker Ally have both taken part in Friends of ANCHOR’s Courage on the Catwalk and Brave events. Now, the group’s remaining fundraising efforts will directly support that local charity.

Naomi Forrest, Communications Executive at Friends of ANCHOR said: “I joined the charity in 2019 when the Wolfpack first got in touch about their fundraising plans. To now be waving them off as they undergo this challenge feels truly special and we are so grateful for their unwavering support over these past few years.

“As they leave Scottish soil for Saharan sand, the Wolfpack’s fundraising total for Friends of ANCHOR stands at an incredible £6,682 – every penny of which will make a difference to patients in our corner of the world.”

The group has chosen to direct some of its fundraising towards Friends of ANCHOR’s ANCHORED Together appeal, which will provide additional extras within The ANCHOR Centre when it opens next year.

Ally Parker, who is celebrating three years cancer free, says he’s pleased to be able to give back to those who supported him while he underwent treatment in the ANCHOR Unit.

Mr Parker said: “The staff within the ANCHOR Unit wards supported me through every step of my treatment, and it feels incredible to be celebrating two years cancer free this year. It is thanks to this encouragement and the outpouring of love from friends and family that I was able to stay so positive throughout, so I want to help ensure anyone facing a diagnosis feels that support too.”

To read more about the challenge or to donate, tap here