New radiotherapy equipment is first of its kind in Scotland 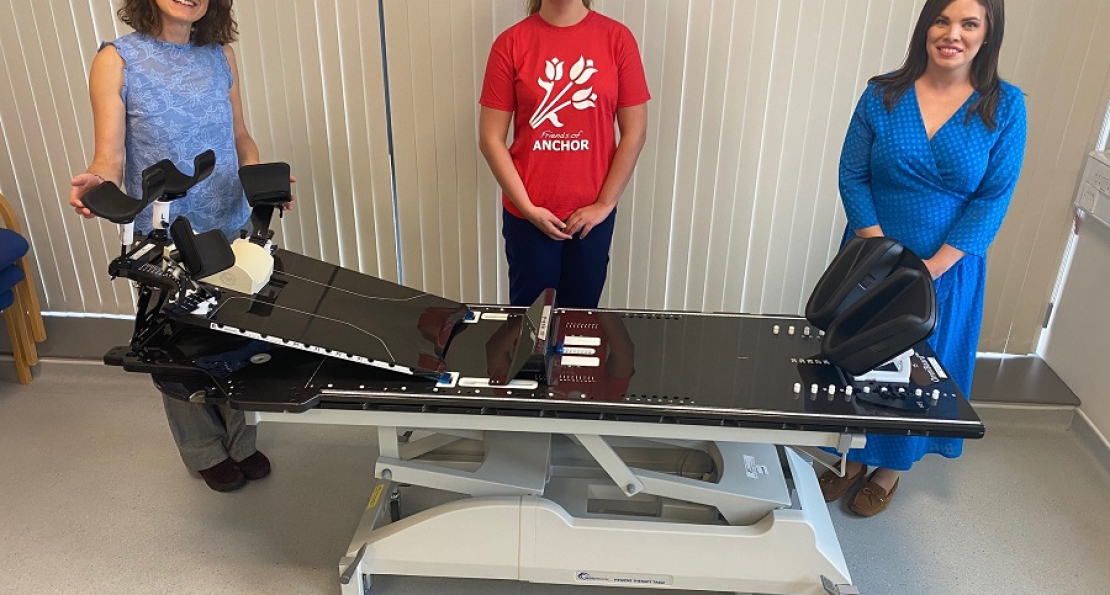 Aberdeen Royal Infirmary is the first NHS hospital in Scotland to benefit from state-of-the-art radiotherapy equipment, thanks to more than £112,000 of funding from Friends of ANCHOR and the NHS Grampian Endowment Fund.

The cost of four ‘OmniBoards’ has been jointly funded by the two charities, to the tune of £56,183 from each charity. The specialist equipment is now in place at the local hospital, where experts say it will bring significant improvements to the delivery of radiotherapy.

The new apparatus, which is the only model of its kind available on the market, is an immobilisation system which allows radiographers to quickly and accurately position patients in order to deliver more targeted and effective radiotherapy treatment.

Radiotherapy Manager Nicola Redgwell applied for charitable funding for the OmniBoards. Nicola Redgwell oversees the delivery of radiotherapy treatment within the department, which treats around 115 patients a day, five days a week.

Nicola said: “The introduction of the OmniBoards will bring significant gains to the department, by greatly improving patient comfort and the efficiency with which treatment sessions can be carried out.

“The system looks a bit like a high-tech stretcher with different modular attachments, which can be manipulated to position patients in highly specific ways. The kit means that we can then reproduce that exact position for patients who require repeated treatments to a tumour site.

“The equipment allows this process to be vastly streamlined in comparison with its bulky and heavy predecessor, and it makes treatment more tolerable for individual patients who would previously be required to hold an awkward position throughout their treatment. The system can be quickly configured to allow for treatment of lung, head and neck, pelvic, breast and gynaecological tumours.”

Charity director at Friends of ANCHOR, Sarah-Jane Hogg added: “Advancements made in dosage technology have allowed increased levels of radiation to be targeted at a concentrated area, which means now more than ever the correct positioning of patients is vital. The OmniBoard is the only device of its kind and we are delighted to be playing a part in bringing it to ARI.

“Friends of ANCHOR has long been committed to equipping the radiotherapy department with the means to deliver more targeted therapies. One of the most notable investments has been our funding of over £13,000 for a film dosimetry system in 2017, to further advance the use of a relatively new radiotherapy technique called SABR.

“Thanks to this joint investment with NHS Grampian Endowment Fund, the department is now the first in Scotland to be the proud home of this new equipment which will bring a significant boost to patients and clinical teams in the North-east.”

Sheena Lonchay, Operational Manager for NHS Grampian Endowment Fund, added: “We are proud to be working in partnership with Friends of ANCHOR to fund four OmniBoards which are specifically for patients undergoing radiotherapy treatment.

“As a charity we help to fund specialist pieces of equipment that enhance the services that NHS Grampian provides as everything the Endowment Fund supports must be for the benefit of patients as they’re at the heart of everything we do.”

As well as the benefits to the SABR technique, the new OmniBoard system, which will be in use later this month, will also benefit the future of procedure planning as it is compatible with Magnetic Resonance Imaging (MRI). MRI scanning has become increasingly useful in pre-treatment analysis to ensure the correct area is being targeted, but this level of compatibility had not been available with the previous apparatus.

Nicola Redgwell concluded: “The acquisition of the OmniBoard system is an important step in achieving the most precise radiotherapy treatments possible for the benefit of our patients.”

Since funding was granted by Friends of ANCHOR and NHS Grampian Endowment Fund at the end of March, all four systems have since been installed at ARI. Training is currently underway and the equipment will be in use later this month.